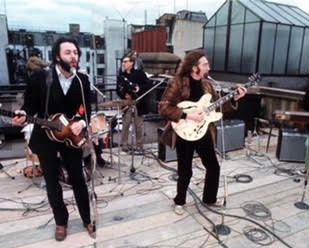 Music was a big part of my life growing up—piano lessons, church choir, band, theater—not to mention the songs playing nonstop in my head. That internal soundtrack is still going, but now I also have the fun lack of decorum that comes with traumatic brain injury, so I hum or sing along to my heart’s content. Where appropriate … usually.

By far my favorite group is the Beatles. It shames me to say that John Lennon’s murder on Dec. 8, 1980, was what sparked my interest in the Fab Four, but at 14 I was a little young to be a first-generation fan.

In college, this guy Ted, who would go on to become my husband, learned I had an encyclopedic knowledge of All Things Beatles. Even with other music, he noticed my lyrical memory was weirdly spot-on, even for songs I’d only heard coming from my siblings’ stereos or seen in songbooks. After 1993, when our daughter was born, I learned lots of “Barney & Friends” songs, sang her lullabies and helped her master the state capitals by singing them.

The Accident came years later, in September 2008. I emerged from a coma with moderate TBI and multiple broken bones and internal injuries, lucky to be alive. As cool as it would have been, though, I didn’t “wake up to the sound of music,” as in “Let It Be,” Paul McCartney’s ode to his mother. According to Ted, I once awoke in the hospital saying, in a robotic voice, “ERR-or. ERR-or,” and something like “01010101010.” I guess my brain was a computer, resetting itself. Or maybe that came from a repressed edition of  “Lost in Space.”

But my soundtrack wouldn’t be silenced. I must have gotten pretty enthusiastic singing around the house … and in public. One Christmas, Ted gave me an electronic keyboard, pointing out that its settings included Grand Piano. I’ll assume this gift was intended to bring me joy and enhance my brain’s recovery, not to confine my musical stylings to the home. I didn’t use the keyboard much for a long time. The truth is, it came with a bunch of instructions and music lessons, and I got frustrated easily. Also, I never was good at sight-reading, and the brain injury had messed with my vision. So the keyboard sat dormant for a while.

Then, on a visit back home, I was at the upright piano complaining that I couldn’t remember how to play Lennon’s “Imagine.” My brother, the only one of us with any real piano-playing chops, showed me a bit of the right-hand part of the introduction, and something in my head went “Boom!” Days later, I started messing with that snippet of the intro on my own keyboard. Suddenly, I remembered the verses, the bridge, the chorus!

There have been a bunch of musical revelations since then, including total recall of “Let It Be” and “Hey Jude.” It was as if my brain needed a nudge, and then muscle memory took over. This sort of thing happened again when a friend and former colleague, who posts a musical-clip-of-the-day on Facebook, shared a Scott Joplin rag that stopped me in my tracks. I sat down at the keyboard and, little by little, played “The Entertainer.” When I joyfully thanked him for the mental boost, he said it had been a different Joplin number!

I’ve been reading “Musicophilia: Tales of Music and the Brain” by the late Dr. Oliver Sacks. You may recall Sacks as the author of “Awakenings,” later a movie starring Robin Williams, about patients brought out of catatonic states with an experimental drug. In “Musicophilia,” Sacks writes of “procedural memories” or “fixed action patterns” (muscle memory?) in the making of music. He says such patterns—as opposed to “episodic memory,” or the recall of events—can sometimes be unaffected by amnesia.

Of one severely afflicted patient, he said: “It may be that Clive … is able to sing and play and conduct music because remembering music is not, in the usual sense, remembering at all. … It is entirely in the present.” Whoa.

Another brain-music connection I wanted to explore was how it could be that, post-TBI, I seem to have gained an understanding of harmony. I’ve always had a hard time sight-reading, unless I’m playing only the right-hand, or treble clef, part—the melody, in other words. But for me, reading the treble and bass (harmony) notes at same time, all while making sure my fingers are on the right keys, is too much multitasking. To cope, I usually end up memorizing the left-hand part … and memorization isn’t so easy these days.

All I needed was love—and nerve

Fortunately, I’ve always been able to tap out melodies by ear. In the past couple of years, I’ve found I can incorporate my own harmony just by adding notes that sound right; I can sense what works and what doesn’t. When I’ve figured out a few bars, I scribble down the notes—F, G and so on—even though I don’t have the patience to put them all in note form on musical staff paper.

I’ve included a photo of the transcription of my by-ear version of “It Had To Be You.” Notice how I’d figured out by then how to notate melody but resorted to letters for the left-hand part. The occasional words remind me where I am in “our” song (which I videotaped myself haltingly playing and singing on our 25th anniversary and texted to my husband at work). Yes, I really did that—and, no, it’s not on YouTube.

“Musicophilia” doesn’t address my question about harmony, but Sacks does say that with temporal lobe seizures (the type to which I have been prone), medical literature lists “many accounts of the onset of musical or artistic inclinations.” He describes a man whose heart stopped briefly in 1994 when he was struck by lightning. After a few weeks of memory problems and a neurological check, he felt well enough to return to work. Soon he was overcome by a desire for piano music—first to listen, then to play and then to compose. Mind you, this patient had had no musical talent before.

Sacks says the man feels he is “a different person now—musically, emotionally, psychologically and spiritually.” The author also notes that although the man’s brain scans showed no damage, the subtler scans available later (Sacks’ book was published in 2007) might show otherwise. But this patient, happy with his newfound ability and unconcerned about why it arose, refused another MRI. Besides musicality, Sacks said, “there are many accounts of … “artistic inclinations … (and) strong mystical or religious feelings, as he had.”

Cool! Same here … well, except for the composing. I do enjoy putting new lyrics into other people’s tunes, but I guess Weird Al Yankovic’s got that market cornered.

I’ll have to throw in some other brain research here to explain a more recent musical experience. After taking a tumble down the basement stairs—a laundry/stupidity-related accident, not a seizure—I was mostly confined to the couch for two months earlier this year.  I was bored. I was angry. I read more news and social media than usual, which did not help. Eventually, deprived of my usual obsessive amount of physical activity, I decided to make my brain useful and focus on my keyboard.

I was practicing some song or another when a waltz I used to play as a kid magically filled my head. After several false starts, I remembered the main theme. Then came a variation, then another, then another, and finally I was back to the main theme. (I’m only now coming up with the musical terms “main theme” and “variation,” so I hope I’ve got them right.) By the time I was finished, I knew what this song was but not the title.

Now, buckle up, folks, because this is about to get weird: I closed my eyes and mentally “went” to Mom and Dad’s piano bench, opened it and took out the red songbook that I suddenly remembered. I looked up the title. Ladies and gentlemen, I tell you, that’s how I remembered “The Irene Waltz.”

Seatbelts still fastened? There’s more. Mom had died in 2007, less than a year before The Accident. I still don’t remember the funeral, but I must have known she was gone, because I asked about her from my hospital bed. And asked again … and again. Though my memory has improved in the past few years—thanks to better neurological care—years of gaps remain. After thinking, writing and thinking some more about the “Irene Waltz” experience, I’ve come to feel in my heart that Mom was somehow giving me a gift.

Kind of like McCartney’s mother, Mary, “when (he finds himself) in times of trouble,” right? … Right??? Yes, I know how nuts that sounds, but I really did inherit the gift of music from Mom and her side of the family. So I’ll just let that be.

Oh, okay, back to science.

‘A Story of Music and Memory’

Studies have shown that music from specific time periods can bring back vivid memories. You can see this for yourself in the 2014 documentary “Alive Inside: A Story of Music and Memory,” a clip of which had already gone viral in 2012. In it, Henry, a dementia patient and 10-year nursing home resident, is described as “unresponsive and almost unalive” until he is given an iPod with headphones that let him hear music from his youth. When a Cab Calloway song begins, he visibly “comes alive,” singing along, talking, keeping the beat.

I’d stumbled upon the film clip on the Internet and was trying to identify the doctor being interviewed. Just as I was about to give up on quoting him, I looked down at the author photo on the cover of “Musicophilia,” the book that my own neurologist—Dr. Elizabeth Gerard of Chicago—had recommended when I told her I was writing this. The man in the movie clip and on the book cover were one and the same: Oliver Sacks!

“Music,” he says in the book, “can animate, organize and bring a sense of identity back to people who are ‘out of it.’ … Music will bring them back ‘into it,’ back into their own personhood, their own memories, their own autobiographies.”

Or as in my case, back to where they once belonged.

2 thoughts on “Back to Where I Once Belonged”