Our 25-year-old daughter looked tan but tired when we picked her up at O’Hare International Airport in Chicago on Sunday. She’d been on a two-week adventure in the Far East with friends and had spent the previous 36 hours traveling back.

While she was exploring Vietnam, Laos, Cambodia and Thailand, her cat had been exploring the far corners of our house. Frank is … how should I put this? … excitable. He’s known to be downright hostile to people he doesn’t like, meaning anyone but his mommy, and especially to my husband. (I won’t go into detail here about the bite that swelled Ted’s finger and led to a course of antibiotics–or at least any more detail than that.)

There was also the matter of our own house pet, LaLa (short for Olive), a skittish longhair cat that cuddles only with Ted and me, and only when she feels like it. Frank is her sworn enemy. On shorter visits, she’d hiss at his every approach, whether he was pouncing at her or sidling up to try to take a sniff.

But we love our daughter, and she adores Frank, so of course we let him stay. It turned out to be an adventure for everyone. We kept in contact with her through daily text messages and photos—allowing us to see the sites and her to keep in contact with her “boy.”

As the days went by, the hostility between the two cats seemed to quiet—a little. Frank still got hissy with Ted but now seemed to want to be LaLa’s friend. Maybe Frank just didn’t understand that his mommy would be coming back and thought this new living arrangement was permanent. Then again, I could just be a crazy cat lady, assigning human emotions to animals.

But now that the ordeal is over, I can admit that the cat situation wasn’t the only thing troubling me during that two-week period. My husband and my shrink both tried to pooh-pooh my fears, but my daughter’s trip coincided with the government shutdown, and I’d read that flights to the East Coast might be disrupted. The shutdown officially ended just before our daughter was due to start flying home, but a day or two after she made it back, there were cancellations at O’Hare.

So, as long as there isn’t another shutdown, her three traveling companions–who’d planned to stay an extra two weeks–will be fine, right? I’m now sitting at my desk, taking deep breaths, watching the birds eating from the feeders across our snowy, frozen lawn, and saying a silent prayer. For those who’d like to know how kooky I really am, here’s a fun fact: My heart chakra just filled up. In other words, my heart is going out to them. It’s going out to us all. Then again, I could just be going stir crazy from being stuck in the house during the polar vortex.

Which brings me back to my daughter, who flew from a region with temperatures in the 90s to … Oh, geez, I can’t even remember what Sunday felt like. Cold, anyway. I loaned her my parka. But in another stroke of … luck? of whatever it was that kept me from dying 10 years ago and finding out that brain injury can be fun when it’s not awful? … she got here before the worst of the polar vortex.

The reality of a polar vortex. 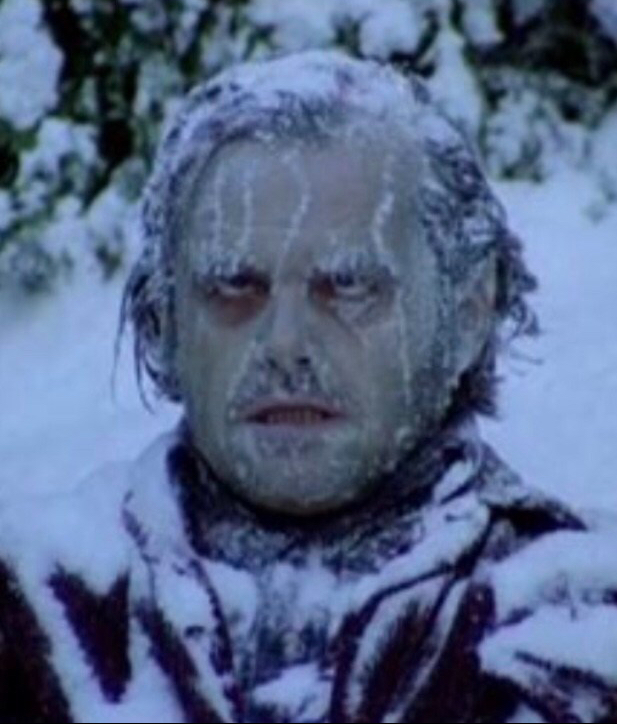 Not to brag, but today (Thursday, Jan. 31), Chicago tied Milwaukee’s low of minus 23. The wind chill in Milwaukee made it feel like negative 40, while our city felt like negative 41. Plus, we live in the western suburbs, so my phone tells me it was much worse.

For the time being, our daughter is staying with us while working from home. Her office, like my husband’s and many in the area, have put on-site operations on hold. We’re all grateful to those who are out there keeping the rest of us safe.

By the way, did you hear they’ve been setting the railroad tracks on fire to keep the trains running? Also, to keep homeless people from people from freezing to death, Chicago city buses were dispatched to serve as moving shelters. This is some serious winter.

So our story has a happy ending–our daughter safe with us and reunited with her cat, our warring pets seeming to have come to a sort of detente, my fears turned into so much empathy for a cat who’s kind of a jerk but misses his mommy desperately that I helped broker the peace(ish)? Okay, I’m probably projecting here. Right now I’m happily housebound.

… which is how I would have ended this story, if my husband hadn’t informed me this morning that Frank has escalated his attacks on him.

One thought on “Cat vs. Cat–or Out of the Frying Pan, Into the Polar Vortex”