It started as a Facebook joke. One of our backyard birdfeeders hangs from atop a pole, and a squirrel kept climbing up and helping himself to the for-birds-only goodies. … At least I assume it was a he. … And the same one.

Ahem. … This time, I’m restraining myself. 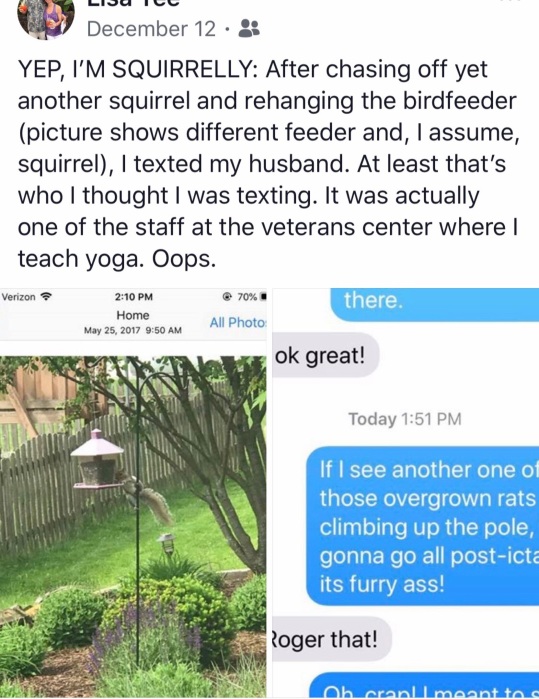 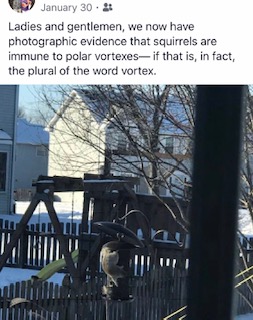 You see, my war against squirreldom might have gone a bit too far yesterday.

I’d gotten into the habit of dashing out the back door whenever I’d see one of those interlopers and shaking my fist, a la Grandpa Simpson. That did the trick, though it sometimes scared off the birds as well. All bets were off during the polar vortex, when I didn’t so much as get near an outer wall of the house. My husband, who has no fear of negative double-digit wind chills, kept the feeders stocked during those dangerous days.

But with warmer weather, I found I could merely open a window and holler at the critters to go away. (I’m using the verb “holler” on purpose here, because I might as well have yelled, “Go on, git!”)

I didn’t truly lose it, though, until yesterday, when I was trying to capture a cat’s-eye view of the birds but couldn’t because the evil squirrel kept scaring them away and stealing their food. (In hindsight, I guess it’s not the height of mental stability to waste time photographing your cat watching birds with the goal of sending a photo text to your husband at work with the lyrics: “My LaLa brings all the birds to the yard/ And they’re like, ‘It’s better than yours’/ Damn right, it’s better than yours/ I can teach you, but I’d have to charge.”)

I didn’t get the photo, but I did send the lyrics. He loves that cat.

But something he said last night did give me pause. I told him how I’d finally had it with that squirrel and run out the door brandishing a wooden spoon at him. He laughed but said, “You’re gonna end up on somebody’s YouTube.”

No, thanks. I guess I’m really only playing to an audience of me. I really do have lowered inhibition because of my brain injury, but sometimes I feel I use that characteristic for fun and for others’ amusement. It’s true that I’ve gotten miraculously better over the past 10 years since a car crash left me with traumatic brain injury and epilepsy. But as my husband (and my neurologist, my shrink, etc.) will attest, I still break down when things go wrong.

Case in point: Last week, it was too cold for me to walk home from yoga, as I usually do, so I was hurrying to catch a ride. In the shuffle I realized I couldn’t find my phone. Friends and staff helped me look through the gym and yoga studio as I became increasingly panicked. I had tried a quick retracing of my steps through the studio, but by then a Zumba class with pounding music was in full force. (Part of my disability is heightened sensitivity to sound.) As my friend Ginnie bravely reentered the studio and found the phone kicked under a chair, a man who works at the desk hugged me. Derrick. I have trouble with names, but that’s one I’ll never forget.

Every day that I’ve been back to the gym, not one person there will allow me to be embarrassed.

So, to completely misquote the movie “Airplane!” “I am serious, and do call me Squirrely.”

One thought on “As Squirrely as I Want To Be”