((NOTE: THIS WAS WRITTEN WAAAY PRE-PANDEMIC)) About a year ago, my cousin Monica asked all the “Curry girl cousins” if we’d be interested in some sort of destination reunion in 2018. 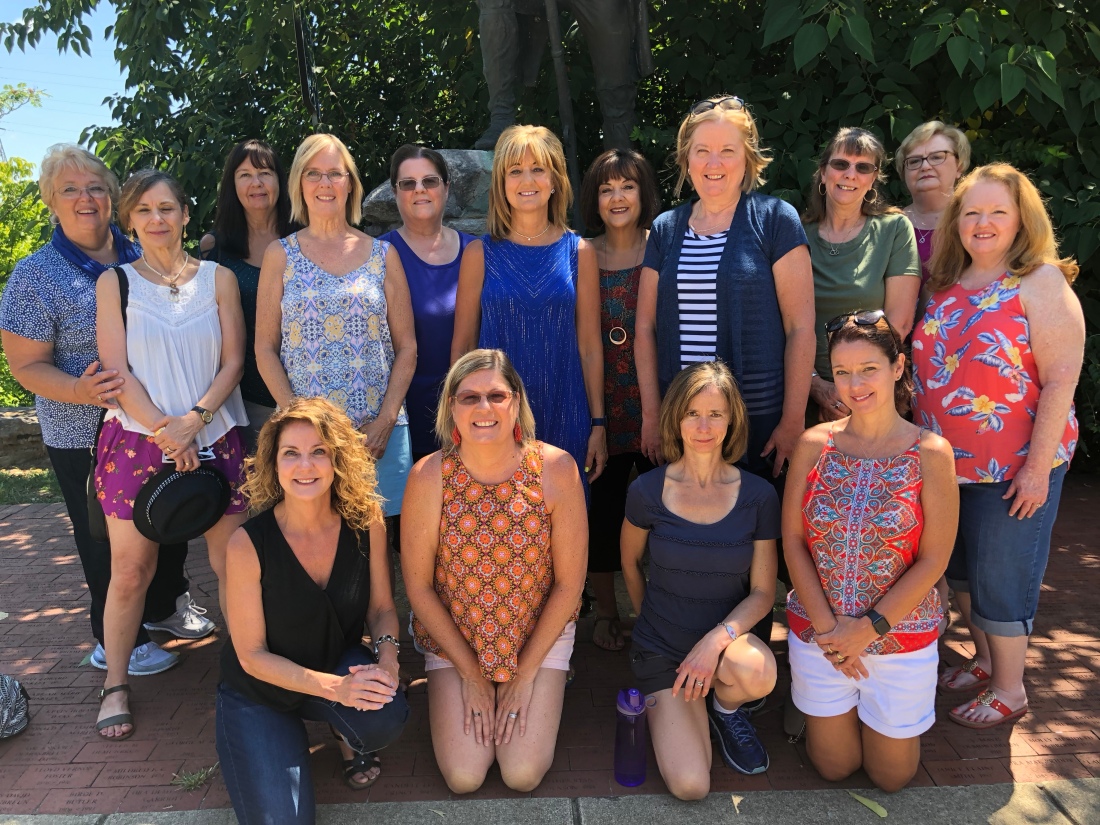 To survey our preferences on price, amenities and dates, Monica, who lives in Kentucky, texted all of the 14 other not-so-girlish women from coast to coast—California, Illinois, Indiana, Maryland, Michigan, North Carolina, Oklahoma and Texas. The last time we had all been together was in 1996, at Pa Curry’s funeral.

There are also 20 “boy cousins”—the sons of Ma and Pa’s children—but this was going to be ladies-only.

My immediate reaction, as with many invitations: Come up with excuses to say no.

Excuse No. 1: My traumatic brain injury and acquired epilepsy. To keep myself on an even keel, I need to get 10 to 12 hours of sleep a night and “keep all my ducks in a row”—live a predictable life, that is. What if had a seizure and, like, died?

Excuse No. 2: My volunteer duties teaching yoga on Saturdays at a women’s shelter and twice a month at a veterans center. Surely no one could substitute for me, the greatest free yoga instructor ever!

The truth is, I just wasn’t sure I could handle it. I had two specific reasons for this hesitation—both of them wrong and stupid—so I hemmed and hawed, hoping I could weasel out of the trip to what had by then been decided to be to Nashville, TN, country music capital of the whole wide world.

Now that I’m back (obviously, I didn’t weasel out of it), I am so grateful that I got to reconnect with these wonderful women.

Just seeing them all took me back to happy childhood days at Ma and Pa’s farm, and at several points we shared stories. This was sort of an education for my younger sister, who’s 50, and me, who were BCFs (Best Cousin Friends) with the boys around our own ages. We weren’t in the Girl Clique of those who are now farther into their 50s or in their early to mid-60s.

Besides reminiscing—the annual Easter egg hunt, the tree climbing and creek fishing, the chores that Pa and Ma would surreptitiously get the older ones to do by making it seem they were the kids’ idea—we talked about our own lives and those of our kids and, in most cases, grandkids. (Hurray for Cousin Mary, whose annually updated Curry Directory makes it possible for me to look up next-generation names!)

Now, about those Stupid Reasons I mentioned above…

No. 1: Music. I love music, but I don’t like country music, and this trip was to Nashville.

Turns out there’s a lot of country music that I do like. The old stuff—Johnny Cash, Patsy Cline, Roy Orbison, Willie Nelson—even Jerry Lee Lewis and Elvis himself were considered country. At one restaurant, the performers (every place seemed to have a band) played original songs and covers that I wouldn’t even have categorized as country; they were just beautiful songs. And Nashville has such a vibrant music scene that I had a blast. … well, as blasty as someone in my condition can get.

Which brings me to an incident near the end of the first, happy night. My sisters and one of our cousins were walking back to the hotel with me from a restaurant a block away. I began to feel that familiar “aura” that can mean a seizure is coming. I hadn’t had a full-on seizure in more than a year, thanks to improved neurological care, but I still get auras.

In the past, I’d have fallen and started convulsing before getting the chance to say more than “uh-oh” or similar. (This is a family publication, so I’ll leave it at that.) This time, I was able to stop, focus on my breathing and say, “Hey, guys…” before sitting down on the sidewalk, closing my eyes and sort of meditating. I stayed conscious—no seizure. My cousin immediately called her sister, and I was soon helped into one of the “cousin-mobiles” heading back.

Thanks to the loving care of multiple Curry women, I was soon back in the hotel room for my meds and a good night’s sleep.

Now for that other Stupid Reason I had hesitated to make the trip:

No. 2: Politics. I was afraid the country’s current divisions and toxic discourse would spill over into our reunion. They didn’t. This weekend was a chance to escape all that.

I love my cousins—always have, always will.

Oh, yeah: There was another reason Cousin Monica had worked so hard (in her quiet way) to get us all to Nashville. Turns out we are descendants of Jacques Timothe Boucher de Montbrun, a French Canadian who fought the British in the American Revolution and is considered the founder of Nashville. We’re something like five generations removed on Ma Curry’s side of the family. Monica had mostly kept this a secret–until we walked up to the statue of our great-great-etc. relative, known as Timothy, and a news crew was waiting. Wow!

But not even our TV news appearance (my sisters and I recorded it on our phones) could compare to the excitement of seeing my cousins after all those years.

Speaking of cousins, we didn’t really forget the “boys.” Besides telling funny stories about them from childhood, we were pretty generous with the wording on the commemorative brick we bought for our ancestor’s statue. It’ll say “Grandchildren of Zoradah Roach Curry, 2018.” (There wasn’t enough space to say “Female Grandchildren!”)

Now that I’m on my way back to Chicago, I can’t imagine what I was so worried about.

P.S.: If you’re in Indianapolis, check out my cousin Eddie as music producer Sam Phillips in “Million Dollar Quartet” at Beef and Boards dinner theater, where he’s artistic director. It’s the story of a night in 1956 when Elvis Presley, Johnny Cash, Jerry Lee Lewis and Carl Perkins played together. At the Country Music Hall of Fame last weekend, Eddie’s sister snapped a photo of Sam Phillips’ star on the Walk of Fame.